Bartel Sanna founded SACO Foods in 1973 in Madison, Wisconsin. By then, he’d already been in the dairy business for nearly four decades, running Sanna Dairies with his father and brothers.

Bartel Sanna, his father, Anthony, and his brother, Leon, formed Sanna Dairies in 1935 in the depths of the Depression. After the Second World War, two other brothers and a brother-in-law also joined the company. 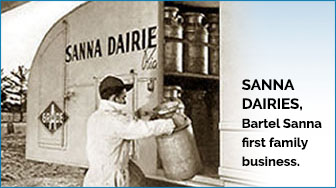 In 1968, the Sanna brothers sold their successful business to Beatrice Foods. A few of the brothers stayed on with Beatrice, but Bartel, who had never had a boss in his life, opted for retirement over corporate life.

Bartel figured out pretty quickly that retirement didn’t suit him—he missed the active life of running a business. And so, in 1973, on his 60th birthday, he founded SACO Foods. Once again, he was swimming against the economic current, founding his new company at the nadir of America’s post-World War II economy.

SACO’s first product was Mix’n Drink Instant Nonfat Dry Milk—just the product the tough economic conditions demanded. In a grocery category generally ordered by the case, SACO’s product sold by the truckload. Because of its price and exceptional quality, Mix’n Drink became an “instant” success.

In 1975, Bartel’s two sons, Ramon and Anthony, brought the “family” to their father’s second family business. Ramon, who had an engineering background, and Anthony, who had degrees in art and design, contributed key skills that helped the company grow and expand with new packages and products. 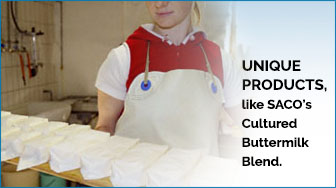 Once the Sannas had entered the baking sector with SACO Cultured Buttermilk Blend, they delivered other innovative products for home cooks: SACO Premium Cocoa and SACO Real Semi-Sweet Chocolate CHUNKS.

Now that SACO Foods was in the chocolate business, a berry good idea popped into their minds; an idea to develop a chocolate especially formulated for creating chocolate dipped strawberries. Ta Da! Dolci Frutta was born: the first hard chocolate shell for coating strawberries… and cherries, and dried apricots, and star fruit, and orange slices, and bananas, and dried pears, and kiwi, and prunes, and nuts, and…, and…, and… You get the picture!

Aside from the variety and uniqueness of SACO’s products, the quality of what they make and what they do has always been the priority of the generations of the Sanna family. It shows in the foods they produce, the long-term loyalty of SACO’s employees and customers, and the care they take in the workplace and natural environment.

In 1995, SACO built a new packaging facility and warehouse in Middleton, Wisconsin. This award-winning design was a far cry from the closed-environment of the typical industrial-park building. Lit primarily by natural light through an extensive use of glass, the high-ceilinged and airy interior is sunlit and bright. Outside, in harmony with an adjoining natural wetland, SACO spurned the use of traditional grass landscaping (and its dependence on pesticides & fertilizer), and restored the surrounding acreage to its pre-farmland, natural Wisconsin prairie habitat. Summertime is an ever-changing sea of flowers, prairie grasses, and the constant hum of bird and bee activity. 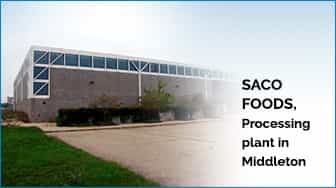 Bartel could be found at his desk at SACO everyday until age 89. Healthy and active to his final days, he died in 2006 at age 93.

SACO Foods’ enduring commitments to quality and community show in the foods they produce, the long-term loyalty of their employees and customers, and their stewardship of the natural environment.

What's your favorite way to wake up in the morning

SACO Foods’ enduring commitments to quality and community show in the foods they produce, the long-term loyalty of their employees and customers, and their stewardship of the natural environment.

Powdered Goods in High Demand Due to #QuarantineBaking

Middleton, WI As more and more people are staying put inside their homes in an effort to... more»

What's your favorite way to wake up in the morning

Dreaming of soup season💭 What soup are you maki

Chocolate + caramel = match made in heaven. These